If you are a proud owner of the Android device, Gacha Cute is compatible . The most current version is Before getting Gacha Cute consider content rating:

Gacha Cute requires of empty space on your device.

Gacha Cute Mod is a free mobile video game utility that allows you to create your own anime characters—just like in the game, Gacha Club. Developed by Akemi Natsuky, this 2D indie game is technically a modded version of the original game and simply adds more customization options.

Unlike the other games under this series, the Gacha Cute Mod only adds new items and allows more flexibility in customizing characters and scenes. There’s no additional gameplay mechanic so veteran players of Gacha Club can easily navigate this. You only have to install it and hope that it doesn’t crash.

For more items and designs
Gacha Club—also known previously as Gacha Life 2— is a casual character creator mobile video game developed by Lunime released in June of 2020. It’s considered the culmination of the developer’s previous games, as elements from Gacha Life, Gacha World, and Gacha Resort appear here. Like the other games, it features a robust character creation system and lets you design and customize to your heart’s content.

Compared to Gacha Club, Gacha Cute Mod doesn’t actually have any huge differences. It simply adds some adorable items you can use for customization. Generally, it allows you to design 10 main characters and 90 extra characters. You can choose from over 600 different poses and freely adjust your character’s hair, eyes, body, and items. Plus, you can set custom profiles for them and import and export your friends’ characters.

This mod also includes Studio Mode, which allows you to create scenes with up to 10 characters. You can add objects and pets, as well as backgrounds, foregrounds, and text. If you happen to have the original game installed, there’s no need to worry as this won’t erase your Gacha Club data and will simply be a second GC app. However, take note that this tends to fail in installing.

Unstable in installations
All in all, Gacha Cute Mod is pretty great if you want more items for character creation. However, don’t expect added gameplay mechanics here since it’s focused solely on in-depth customization. Plus, it can be pretty tricky to install as not all devices are compatible with it. In terms of added content, though, it’s one of the more popular mods around. 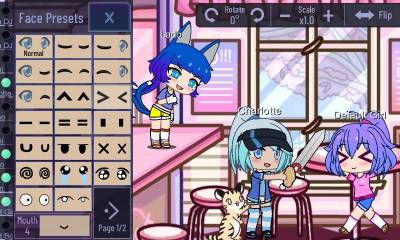